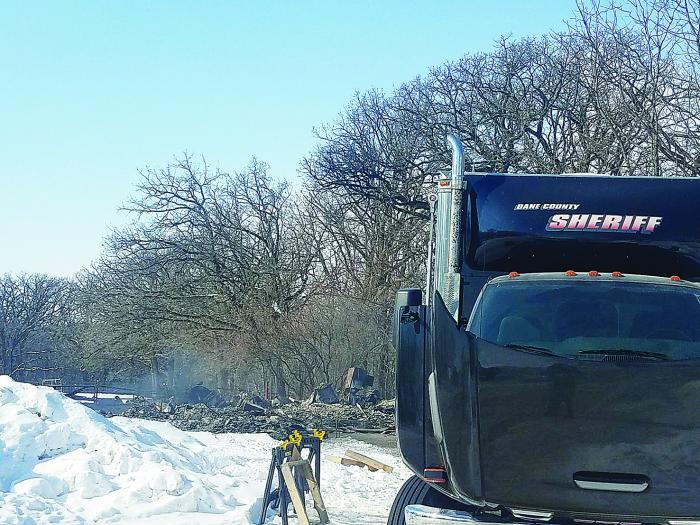 Person who died in Blue Mounds fire identified by authorities

On Wednesday, February 17, at approximately at 11:45pm, Dane County Sheriff’s deputies, Mount Horeb Police and Fire Departments from Mt. Horeb, Verona, Belleville, Cross Plains and Blanchardville responded to a residential fire on W. Erbe Road in the town of Blue Mounds. A citizen driving by called 911 to report flames coming from a structure. Upon arrival, emergency responders found the home to be fully engulfed by flames and it was considered a total loss.

While investigating the scene on Thursday, February 18, human remains were recovered.

On Tuesday evening, the body was identified as Scott M. Wylie, 68, of Blue Mounds.

Mr. Wylie was pronounced deceased at the scene.  A forensic examination was completed at the Dane County Medical Examiner’s office on 02-23-2021.

Preliminary results of the examination disclosed that Mr. Wylie’s death was the result of injuries sustained in and because of the fire.  Additional testing is underway at this time.

“0.026 Seconds: The Magnitude of Small Moments” features 26 photographs—representing a literal 0.026 seconds—taken by Matt Geiger over the course of his eight-year tenure as Editor of the Mount Horeb...
US 18/151 "safety improvement" project begins Monday, Mount Horeb to Ridgeway
Safety improvements will begin Monday (April 12) on US 18/151, between the County JG overpass in Mount Horeb and County BB near Ridgeway, in Dane and Iowa counties. The $1.9 million project will...
Water main break floods some of downtown Mount Horeb
Commuters on Tuesday evening encountered unexpected water - a lot of it - as they made their way through downtown Mount Horeb. The flooding was caused by a water main break and the Mount Horeb Public...
Fatal crash in the Town of Springdale (UPDATED)

On Tuesday, April 6 at approximately 4:48 p.m., Dane County Sheriff’s Office deputies, Fitchrona EMS and Mount Horeb Fire and Rescue were dispatched to an injury crash on CTH PD at the intersection...
Gleanings
130 Years Ago- April 2, 1891 Dane County Sun Dr. D. E. Soule is roaming around like a lone widower, his wife having gone to Mukwonago, visiting friends.  The “grippe” has laid siege to a good many in...