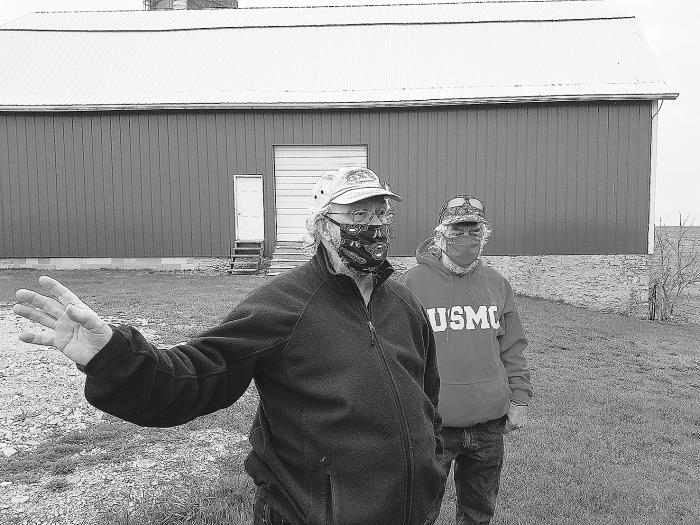 ‘Everything was an adventure to me...’

Memories from a century farm

A couple generations ago, a farming family from rural Mount Horeb lugged their many instruments into Cuca Record Corporation at 123 Water Street in Sauk City, Wisconsin. In the studio that day, the Steinhauer clan gathered around and played together, just as they did regularly in the family farm house, while the crops grew and the cattle lowed in their barns.

“Out where the bright lights are glowing; You’re drawn like a moth to a flame; You laugh while the wine’s overflowing; While I sit and whisper your name…”

Today, you can still hear the family band playing those songs, accompanied by the rich crackling of the record, despite the fact that those children are now in their 70s. Today, brothers Charlie (who played the trumpet back then) and David (who played the coronet) Steinhauer are standing in the farmyard at 3203 State Highway 78, remembering their childhood days playing music with family. Founded in 1864, the future of the Steinhauer farm today is anyone’s guess, but its past is filled with sweet nostalgia. There are memories of music, manure, and everything in between as Charlie and David reminisce together.

“We didn’t have any money,” recalls Charlie. “We were not poor; we had everything we needed…”

“…an nothing we didn’t,” chimes in David with a grin.

Generations of their family have farmed the land there, on the edge of Mount Horeb, and on a nearby farm members of the family also operated for many years.

Charlie and David, along with siblings Duane, Mary (who now lives in Switzerland), Susan and Donald, are the children of Ruth and Henry Steinhauer. Their Swiss roots run deep, and many members of the family have ventured to the land of their ancestors more than once to connect and reconnect with their homeland. But for far more than a century, Mount Horeb has been home.

“God bless them,” says Charlie of his parents. “They were a very good mom and dad.”

The house is what was called a “four-square,” and it was built in 1931. The nearby barn - which Ruth restored and bolstered with metal siding and a roof before she passed away last year - is of the hung variety. The family spent much of their youth living in a nearby farmhouse on a different parcel, and these 113 acres of land were long used to grow corn, oats and hay, as well as to keep young cattle, dry stock, steers, chickens and more.

Today, as they enter the old barn, Charlie remembers asking his mother why she chose to spend the significant sum to fix up the old barn, and she explained that it was important to take care of the buildings.

They are a clan with links to farmers, cheesemakers, and the various other peices of the early European settlers in Wisconsin.

Charlie and David remember cleaning the cows’ stalls on Saturdays, racing to see who could hit clean cement first.

Charlie’s son, Tim, is now in his early 40s. While he did not grow up on the farm, he spent what he calls “a vast amount of time there and [at] my nearby aunt and uncle’s farm where my dad grew up.”

His memories are both “awesome” and “rewarding,” he explains.

“Two of my cousins grew up on the nearby farm and I was thrilled when I could join them,” he says. “Everything was an adventure to me. There was always plenty to do. Field chores once we were tall enough to reach the pedals on the tractors, barn chores and you know the list. Plus, the view was amazing.”

When he was a child, Tim visited often, spending time with friends and family even after they were no longer actively farming the surrounding land.

“Grandparents are the absolute best,” he says.  “Grandpa would regularly take me on trips with the cattle trailer to the stockyards in Milwaukee. The best comfort foods are served at stockyards. My grandparents were involved in a lot, so they knew someone wherever we went.”

His fond memories include everything from his grandmother’s delicious, thin European-style pancakes to the music that is such an important part of the family’s history.

“Music was always present,” he says. “We regularly listened to polka music. It’s happy music. Smells like fresh cut hay can take you to a moment like it was yesterday. Farming and religion seem to parallel in so many ways.  Both were pillars of my grandparents’ life and life choices. Both instilled a strong work ethic, humbleness and faith.”

The land has been leased out for a number of years now. The property is for sale, as evidenced by the large sign staked into the ground out by Highway 78. The next chapter for this patch of earth is yet to be written.

As is often the case, the allure of this part of the country is fundamentally changing the things that made it special in the first place.

“Our ideal landscape and proximity to Madison are proven by the expansion to and development of western Dane County,” says Tim. “Who wouldn’t want to live here?”

He is unsure what will become of the family farm, itself, but he thinks some of its history will live on in books and recipes and all the other places family stories stay alive.

“Thank goodness we have such a great historical society,” he says.

Some of it might live on in jokes, too. Standing in the farmyard, Charlie remembers one his father used to make: “When people would ask my dad if he played music by ear, he would say: ‘No, I just use my fingers.’”

The Century or Sesquicentennial Farm and Home Award designation is given and recognized by the Wisconsin State Fair, honoring a way of life that is inexorably woven into the Midwest’s history. To qualify for the award, families are required to provide proof of continuous family ownership of a property in the state of Wisconsin for either the last 100 or 150 years.

Properties in 70 of Wisconsin’s 72 counties have been honored with the Century Farm Award since the program first started in 1948. Today, Dane County has more properties – a total of 409 - than any other. In fact, it has 50 more than the runner up, which is Dodge County. At the first Century Farms Award Ceremony, 808 properties were honored in the first year. Since then, 9,731 properties across the state have received the award. Since the start of the Sesquicentennial Farm Program in 1998 honoring 150 years of continuous family ownership, 955 properties have received the award. Just last year, 118 Century Farms and 36 Sesquicentennial Farms were added to the list.

Old Oaks will hold an album release party June 4 at Brix Cider from  5-8 p.m. Armed with the experiences of an ever-changing world, the musicians in Old Oaks bring their storytelling in the limelight...
A troll origin story
Mount Horeb’s Driftless Historium welcomes back Portland, Oregon-based writer and researcher Britte Rasmussen Marsh on Tuesday, May 18 at 6:30pm for “Troll Genesis: From the Hammer to the Cross.”...
Ending Deaths From Despair Coalition meets for first time
Last week, County Executive Joe Parisi joined with local community leaders in the first meeting of the “Ending Deaths from Despair Coalition” with a mission to help prevent deaths from suicides, drug...
Recreation Notes
Are you looking for a summer job opportunity?  We’ve got you covered! The Recreation Department is hiring for the following summer and fall positions:  Lifeguard (minimum 15 years old), Playground...
Village of Mount Horeb welcomed into state’s revitalization program
The Village of Mount Horeb has been accepted into the Wisconsin Economic Development Corporation (WEDC)’s Connect Communities Program, an initiative that “works with communities to advance downtown...