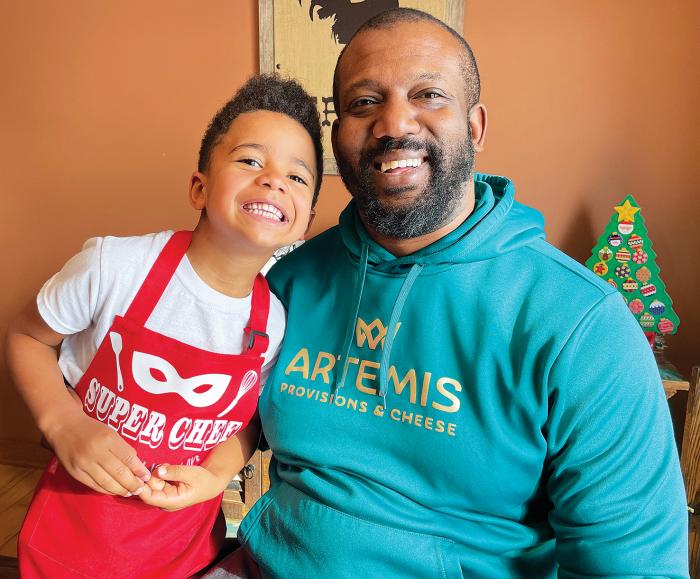 Artemis and Taste will come to downtown Mount Horeb

Kingsley Gobourne was born to a single, 16-year-old mother in a small, struggling country. He didn’t own a pair of shoes until 1987, years after he learned to walk. Today, he is 40, but he still remembers those first sneakers, with their fancy Velcro, fondly and vividly.

He was going to need good footwear, because he had quite a journey ahead of him.

After emigrating from Jamaica to the United States, Gobourne lived a rural, Midwestern life, working on farms and forging bonds with those around him. He attended the University of Wisconsin, won a Rose Bowl with the Badgers, and earned degrees from the UW Sociology Department and the Edgewood Master’s in Organizational Development program. He worked in banking, community development, outreach and more, eventually becoming the Diversity, Equity and Inclusion Coordinator for UnityPoint Health Meriter, heading up an effort to improve “culture and climate” for 3,500 employees. He co-founded Artemis Provisions and Cheese, a food supplier, with his wife. He also chairs the Village of Mount Horeb’s Community Development Authority (CDA).

That was all in his first four decades, and it looks like what comes next might be both a culmination of what he has built and a whole new frontier to explore. As far as he has come, Gobourne’s newest venture, located in the heart of downtown Mount Horeb, harkens back to some of his earliest influences; back to the Caribbean food his mother made for him, both in Jamaica and later in the United States.

This year, Artemis Provisions, which is named after the Greek goddess of the hunt, plans to move into commercial space on Main Street. In addition, they will also open Taste, an artisan, locally-focused butcher shop that works to help bridge the gap between area farmers and hungry customers. The business could help fix a serious crisis that has been building for years now; the inability of meat processors to handle all of the animals that farmers need to sell and people want to eat.

Right now, most butchers in Wisconsin are asking farmers to wait months, sometimes years, to process their animals. Taste won’t run an abattoir, but it will take half animals from slaughterhouses, processing them from there and easing the burden on the existing food supply chain.

They will have the freedom to create custom and exotic cuts, and they plan to do so at competitive prices. They will draw inspiration from food all over the world, including Gobourne’s Jamaican roots.

Taste and Artemis Provisions plan to open at 213 and 215 Main Street, by the Pop Shop. The project will include a build-out to create an open storefront below, preserving the unaffiliated soda store, while opening their meat and cheese shop.

“We’re excited for this,” Gobourne explains. “This will increase the capacity for local farmers to get their products out there.”

“It will feel almost like a mall area,” Gobourne says.

Gobourne is quintessentially American, in that he is many things in one. His identity and experience are inexorably linked to the fact that he is a Caribbean immigrant who grew up around Scandinavian immigrants (in the Blanchardville area), in a place where many people left their former homelands with little more than shared recipes to create dishes around which their families could gather in unfamiliar new lands.

Taste is, according to many in the community, something for which Mount Horeb is hungry in 2022.

“I think this really fits so well in Mount Horeb,” he says.

Many things can be “doors,” including the various hurdles that life throws in front of people.

“Every problem that comes up, we try to lean into that as an opportunity,” he explains. Sometimes you don’t realize something was an opportunity until you get through it, he adds.

“You know, in my personal journey, when I was little, at first I hated that it was just my mom and me and we didn’t have a nuclear family,” he reflects. “But then we got to come here, and it wouldn’t have happened otherwise.”

“I grew up in a small, all-white community, and at first I remember being like, ‘Why did you bring me here?’ I’m from Jamaica and now I’m milking cows with Norwegians!’ But then I built connections with so many people, and now I’m comfortable in so many different spaces,” he continues.

Those connections are coming in handy as he works to build Artemis and Taste.

Gobourne’s work in many realms has been to serve as a bridge. A bridge between ideas, people and resources. People often find themselves on islands, far apart, when it comes to race, politics, opportunity, and even food. He has worked to bridge those gaps.

“I try to be willing to engage in uncomfortable conversations with good will and the grace to understand people’s intent,” he says.

In a very literal way, customers and farmers often find themselves separated by a sluggish, overburdened, overcomplicated food supply chain that nearly broke during the heights of the pandemic. Many local farmers raise beef and pork and lamb, yet it can be hard to get the meat processed and into the hands of local customers. Once again, Gobourne wants to build that bridge. They will even be able to expand their catering services.

He won’t be doing it alone, though.

“My wife [Melissa] is my co-captain in life,” he says. “We complement each other really well and also allow each other space to work.” Young sons Thaeden and Wesley also pitch in.

“We’re lucky to be in a business where we can all be working together,” he says. “Our kids come with us when we deliver gift boxes. We get to be together.”

One bright winter morning last week, the realities of this were on full display at the Gobournes’ Mount Horeb home. Kingsley was simultaneously taking part in a virtual meeting, pulling hot pizza out of the oven and placing it onto a plate for his youngest son, and having his photo taken for a local newspaper article. While the work will continue to be family-oriented once they set up their retail space on Main Street, it will be useful to have a place dedicated to business. But Gobourne doesn’t want to separate the different aspects of his life too much. He wants to grow and streamline things, but if it all stays interconnected, he’s okay with that, too. He’s come a long way since his youth, and he has traveled far since he put on those first shoes. And while his journey is far from over, he says he and his family – and their growing businesses - are at home in Mount Horeb.

“I just ran into my child’s teacher at the grocery store,” he says. “I love that.”

Family farm enters seventh generation
Four generations of the Kahl family are sitting on a lawn overlooking their barnyard on a midsummer morning. Helen, who recently moved out after nearly half a century, turns to her great grandson,...
Lisa Kueter-Anderson joins the Mail

Lisa Kueter-Anderson recently joined the team at the Mount Horeb Mail and Buyer’s Guide of Dane and Green Counties.  She is working with communities in and around Mount Horeb and New Glarus, helping...
Village hires consultant to fill economic development role
Board Hires Economic  Development Consultant  to Fill Director Position At the August 3 meeting, the Mount Horeb Village Board agreed to enter into a contract with Redevelopment Resources LLC to fill...
This popular St. Paul tattoo artist has Mt. Horeb roots

Tattoos are one of the oldest forms of art in existence. Otzi the Iceman had them. The Siberian Ice Maiden had them. Many ancient Egyptian mummies had them. For a period during the modern era, they...
Carl Miller named Grocer of the Year

Carl Miller, owner of Miller & Son’s Supermarket with locations in Verona and Mount Horeb, was named the 2022 Grocer of the Year by the Wisconsin Grocer’s Association.  Carl Miller has spent 60...