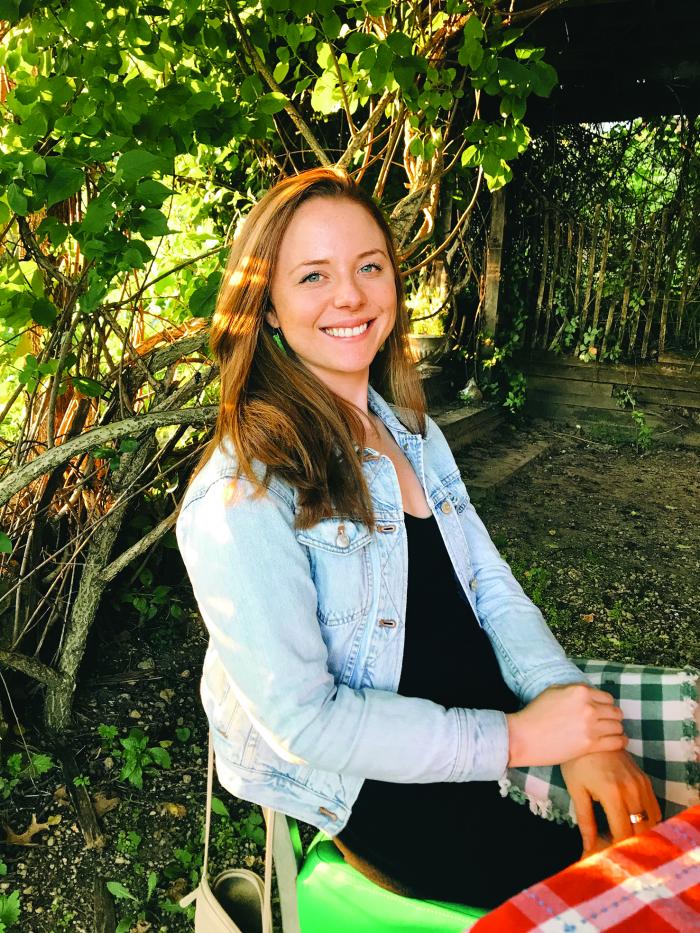 Psychedelics at the Rotary Club. Until fairly recently, it might have sounded more like a satirical headline than a legitimate one. But things change, including how people think and talk about trauma and how it should be treated. And just a few weeks ago, psychedelics were, indeed, the topic at the local civic club’s gathering.

For neuronaut Lily Smith, her presentation to Mount Horeb Rotary about the therapeutic use of  psychedelics was a homecoming. A 2009 graduate of Mount Horeb High School, Smith earned a degree in neuroscience from Boston University, worked in brain research at MIT, and currently works as Adherence & Supervision Coordinator for the Multidisciplinary Association for Psychedelic Studies (MAPS), a non-profit organization that specializes in research and education that develops medical, legal and cultural “shifts” toward the use of psychedelics and marijuana for mental healing and health. In fact, when she was a student here, Smith even earned a scholarship from the local Rotary Club.

Currently, the drug MDMA is in late-stage clinical trials across the world for the treatment of people who have experienced severe trauma. That is Smith’s area of expertise, and it stems back to her love of science, psychology and the complexities of the human mind and consciousness, which sprouted when she was a young student in Mount Horeb.

Growing up on her parents’ farm in Blue Mounds, Smith’s interests were already blooming in high school.

“I was really fascinated by both science and psychology,” she recalls. “I had an interest in finding out how the mind works and manifests in behavior.”

When asked what she likes most about the human brain, she replies: “Just how complicated it is.”

When she left home and continued her studies, she says she gained a “deeper appreciation of just how much more there is to learn” about people and the way they think and behave.

Psychedelics are nothing new, and they have been used by people all over the planet stretching back into prehistory. Traditionally, they were linked to spiritual and artistic realms. In the 20th Century, they were often associated with Timothy Leary and various sub- and counter-cultures. But in 2022, they are increasingly falling under the umbrella of modern science, and they are increasingly mainstream.

“The discourse has changed,” explains Smith. “It seems to be that there is a movement where people are coming out of the psychedelic closet.”

“As more and more research comes out, it has changed a lot of minds and people are more interested,” she adds.

The Multidisciplinary Association for Psychedelic Studies was founded in 1986 by Rick Doblin, Ph.D., a Harvard-trained scientist who has worked since then to change perceptions about the use of certain drugs.

“It’s not about the drug; it’s about the therapy that the drug helps make more effective,” Doblin said during a 2021 interview on the most popular podcast in the United States, “The Joe Rogan Experience.”

Smith works primarily with MDMA. Often referred to as Ecstasy or Molly, MDMA stands for 3,4-methylenedioxy-methamphetamine. While it has a growing number of supporters, the federal government’s official stance as of now is not exactly a ringing endorsement. “MDMA is a Schedule I drug under the Controlled Substances Act, meaning it has a high potential for abuse, no currently accepted medical use in treatment in the United States, and a lack of accepted safety for use under medical supervision,” states the Drug Enforcement Administration. The DEA says overdosing on the drug, which is often impure when purchased on the street, can cause severe injury, organ failure and death.

But that could soon change, pending the results of ongoing trials in the United States, Canada, Israel and elsewhere.

“The main type of trials I work on are MDMA[-assisted therapy] as treatment for PTSD. It’s important to mention that it’s assisted with therapy,” Smith says.

While many people believe ongoing studies show MDMA does work to help those who suffer from the effects of trauma, researchers are still figuring out how and why.

“There are still a lot of questions, but we know for sure that it decreases activity in the amygdala, which is the fear center in the brain,” she explains. “It helps people be calm, be more relaxed. It allows them to talk about their trauma and stay centered. It allows them to address it without becoming agitated.”

For people who have survived the horrors of war, this can be a key that unlocks the ability to talk about and process the memories that haunt them.

“It can be really painful to go in and talk about the worst thing that ever happened to you,” Smith says. “Warm, loving, calm connections can help.”

She says those connections can stay long after the drug has left someone’s system.

“We are finding that, in people who MDMA[-assisted therapy] works for, it seems to have long-term effects,” she says. “One, two, three years after, they continue to feel better.”

“Another way we think MDMA[-assisted therapy] works is on the levels of oxytocin … it helps facilitate bonding and compassion,” she continues. “Both with the self and the therapist.”

“It’s the therapy and MDMA together, as treatment,” she adds.

Smith believes MDMA could eventually be used to help treat eating disorders, anxiety, and even coping with the soul-shattering ramifications of the end of life.

“Often people think about combat veterans, but trauma can result from myriad things; from sexual assault or child abuse, witnessing injury or death, or natural disasters,” she says.

“I think we are finding that PTSD is much more prevalent than we thought,” Smith adds.

But first, it would have to shed some of its stigma.

Neuroscientist and podcast host Sam Harris said in 2011: “One of the great responsibilities we have as a society is to educate ourselves, along with the next generation, about which substances are worth ingesting and for what purpose and which are not. The problem, however, is that we refer to all biologically active compounds by a single term, drugs, making it nearly impossible to have an intelligent discussion about the psychological, medical, ethical, and legal issues surrounding their use. The poverty of our language has been only slightly eased by the introduction of the term psychedelics to differentiate certain visionary compounds, which can produce extraordinary insights, from narcotics and other classic agents of stupefaction and abuse.”

Smith says that, in the decade that elapses since he spoke those words, people really have started to discuss psychedelics in more nuanced, meaningful, scientific ways. She has been surprised by “just how many people [are interested] in this who you wouldn’t expect to be.” People from the right and left, old and young, mainstream and counterculture, have all become intrigued by these compelling potential tools in the fight to help ease the suffering of countless members of humanity.

“[What is surprising is just] how much attitudes about psychedelics have changed in the last 10 years,” Smith states.

Family farm enters seventh generation
Four generations of the Kahl family are sitting on a lawn overlooking their barnyard on a midsummer morning. Helen, who recently moved out after nearly half a century, turns to her great grandson,...
Lisa Kueter-Anderson joins the Mail

Lisa Kueter-Anderson recently joined the team at the Mount Horeb Mail and Buyer’s Guide of Dane and Green Counties.  She is working with communities in and around Mount Horeb and New Glarus, helping...
Village hires consultant to fill economic development role
Board Hires Economic  Development Consultant  to Fill Director Position At the August 3 meeting, the Mount Horeb Village Board agreed to enter into a contract with Redevelopment Resources LLC to fill...
This popular St. Paul tattoo artist has Mt. Horeb roots

Tattoos are one of the oldest forms of art in existence. Otzi the Iceman had them. The Siberian Ice Maiden had them. Many ancient Egyptian mummies had them. For a period during the modern era, they...
Carl Miller named Grocer of the Year

Carl Miller, owner of Miller & Son’s Supermarket with locations in Verona and Mount Horeb, was named the 2022 Grocer of the Year by the Wisconsin Grocer’s Association.  Carl Miller has spent 60...