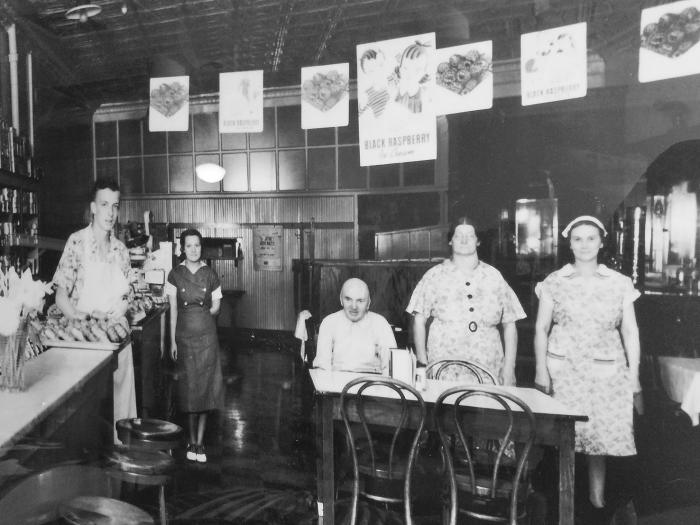 There has been a restaurant at 128 East Main Street in Mount Horeb since 1911.

The Driftless Social will open at former Schubert’s

Lease was signed this week

When the restaurant at 128 East Main Street in Mount Horeb served its first meal, the television had not yet been invented. The first shot of the first World War had not yet been fired. Vacuum cleaners and washing machines were still a futuristic dream for most middle class homeowners. Zippers, Band-Aids and sliced bread wouldn’t be dreamed up for several more years.

The year was 1911, and a man named Otto Olson left his job making butter at a local creamery to open a bakery and restaurant in downtown Mount Horeb. It is impossible to articulate just how much the world has changed since then, but through all of it, through the wars, the disasters, the triumphs of art and love and humanity, the eatery that was known as Olson’s, Frederickson’s, Gobel’s and most recently, Schubert’s, was feeding people in the heart of downtown Mount Horeb. In 1980, Jerry Schubert and his business partner, Gerald Thompson, purchased the business. On Thursday, August 19, Schubert, now 85, passed the torch to two brothers who know quite a bit about how to run a successful eatery: Matthew and Tim Schmock. The Schmocks will re-open the business, which has been closed, as The Driftless Social.

The Schmocks are the grandchildren of Leonard “Smoky” Schmock and his wife Janet, who opened one of Madison’s most iconic restaurants in 1953. Smoky’s Club is still going strong there today, run by their two sons, and Matthew and Tim have been working in the family business since they were mere children.

The Driftless Social will feature steaks, seafood, a dizzying array of martinis and old fashioneds and wines, with some bar food as well. The menu is still in the works, but things are already starting to take shape. It will be something of a hybrid supper club, offering a new and unique dining option in a village hungry for more places to go.

“It’s going to be dark, with a really chill and relaxed mood, with Frank Sinatra on the stereo,” explains Matt Schmock. “Really comfortable. Just a really nice place to go with friends and family and neighbors.”

It is a job he and his brother know well, from the ground up.

“We basically grew up at Smoky’s Club,” he says. “I was dishwashing at 13. I was bussing through high school. I was bartending at 17.”

In fact, whenever members of their family opened a new restaurant in the Madison area, they tended to send the two brothers there to work. Now, they plan to open their own place in Mount Horeb, where they can apply all they know on their own terms.

Before that can happen, the building will undergo a massive amount of work. They will strip it down to the four bare walls and rebuild almost every aspect of the space. In the works are a new, 36-foot bar, handmade booths and tables, brick walls, cedar and pine floors, and much more. While the restaurant does not currently have a bathroom on the ground floor, that will soon be remedied as well, with the addition of one that is handicapped-accessible.

While Schmock calls it a “fresh start,” he is acutely aware of the history of the place. And the history he brings to it. “My grandma just passed away a few weeks ago,” he says. “She was 94. “Grandpa was kind of the face of Smoky’s, but behind the scenes it was always her. When they would get a delivery of steaks, she would sit down and inspect everyone. It’s all about quality.”

Speaking in an exclusive interview last year, Schubert said he was dedicated to finding someone who could take his beloved restaurant’s past and stretch it well into the future.

“There is an, I don’t know, originalism and hospitality here,” Schubert said. He said it was “terribly important” that one of Mount Horeb’s most iconic eateries stay alive.

“This can be a special place,” he added.

Schmock says he agrees – about the restaurant and the entire community – wholeheartedly. He says he and his brother hope to finish remodeling and open their doors to the public by early December.

Speaking on Monday of this week, Schubert called the Schmocks “a really good fit.”

“I am excited,” said Schubert, who has been laying low of late to avoid a barrage of questions about the restaurant. “I think the village needs a place like that. It’s going to be very nice.”

Schubert, who was the face of the eatery for the better part of 42 years, says he is happy to see something new come to 128 East Main Street. When The Driftless Social does open its doors, he doesn’t expect to be too far away, either, despite the fact that a new generation is taking over.