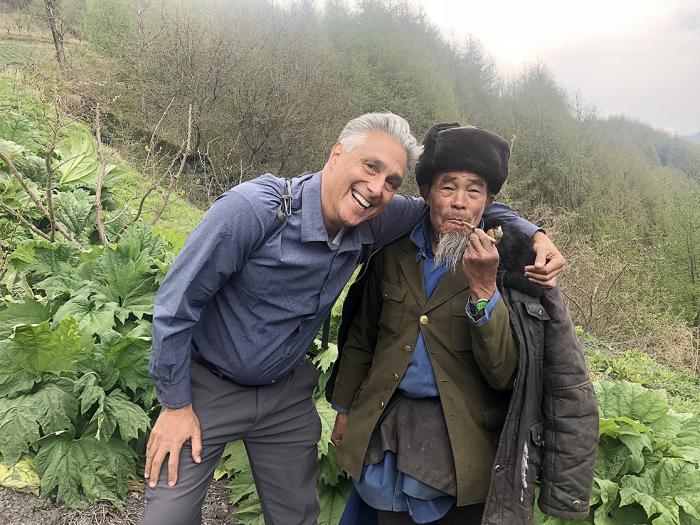 'I Went To The Woods To Live Deliberately'

“It’s an odd time to be conscious on this planet,” muses Marc Brody.

As president of Panda Mountain, a nonprofit that works in the Wolong Nature Reserve outside Chengdu, China, Brody says it is a time of enormous despair angst. He says there is an impending sense that the natural world is on the brink of collapse.

But this is also, he is quick to point out, a time of hope.

He says human beings can’t save everything; they can’t fix every problem facing a warming planet roamed by nearly 8 billion people. But they are far from helpless.

“The conversation starts with the human spirit,” Brody states, pulling over so he won’t lose cell phone reception in the deep, wooded ravines that typify the Vermont township where he lives. “And what matters is, to keep our spirit strong. Our spiritual connection to nature is our redemption.”

“You can alleviate the suffering of some,” he continues, his voice trembling with emotion. “You can save some. You can bring fulfillment to some. We must claim victory when we can and take solace in that.”

Brody has spent the last two decades working to save the Giant Panda and restore natural world the panda and so many other species need, in China. An expert in protected-area land management and ecological stewardship, Brody believes the bucolic splendor and ecosystems of Wisconsin, are no less special – and no less in need of help.  He cites a Wisconsin Department of Natural Resources publications that ranks oak openings and oak woodlands of southwest Wisconsin as “Critically Imperiled. At very high risk of extinction or elimination.” In the Sichuan Province of China, Brody works to develop strategies to restore vital corridors for wild pandas. In Wisconsin, in his own backyard, he does the same for butterflies.

“[Restoration] becomes more meaningful, for me, especially in light of what happened [during the global climate strike on Friday, Sept. 19, when millions of youth all over the world displayed their concern for the fate of the planet,]” he says.

“Humans, someway, always can find a way to be resilient – to be defiant and address despair,” he says.

“Even looking civil rights, looking at Tiananmen Square, that iconic image standing in front of the tank, or a black man in America facing a fire hose or dogs– right now, the challenge is how to give people hope, and how to fight despair.”

Brody’s journey, both to Wisconsin and to China, began in an unlikely place.

“I grew up in the center of Los Angeles,” he explains. “Where mythologies are made. It was an urban environment, I still have impaired lungs today because of the air pollution I experienced in my youth. I remember, as a child not being able to play outside.”

When asked why he came to Wisconsin, he quotes Henry David Thoreau.

In the American Midwest, Brody sought something fundamentally different from the cityscape of his childhood. He came to attend graduate school at the University of Wisconsin in 1986, buying a secluded old farm outside Mount Horeb. He has lived there ever since, splitting his time between China and the United States, but always calling Wisconsin his home.

In some ways, Brody has been on this path since childhood. As an adult, in a damp, forgotten old suitcase of his mother’s, he once found a grade school assignment in which he – at seven years of age - was asked to imagine what he’d like to do with his life. He said “I would buy a farm (and) my family would have fun.”

“It’s amazing, in life, how one thing leads to the next, and then you find yourself in a certain niche,” Brody reflects.   After 25 years of environmental work in China, Brody has become a National Geographic Society Explorer and Expert for giant panda conservation.

Environmental challenges can seem daunting to those who are concerned about them. One recent critique of the modern environmental movement is that, by working too hard to express the dire consequences of climate change, the message has actually made millions of people feel overwhelmed and helpless, as if they live on the brink of an unavoidable environmental collapse. Brody is as worried as anyone about Earth’s fate, but he doesn’t feel powerless, and he doesn’t believe young people should feel powerless, either.

“Saving endangered animals and restoring habitat can’t be big, isolated acts,” he observes. “Rather, it has to be many small acts.

“When I started, I was the only environmental nonprofit  with an office in China. Now there are lots, and that’s great,” he says.

He says Panda Mountain’s goal is to develop strategies to engage the public in habitat restoration, and to enhance best practices for resource management.

“There are deeper long-term questions about the management of public land and how we engage the public with habitat degradation, species loss, climate – the big connection to our world,” he states.

In a recent National Geographic publication, Brody said humans could learn a lot from pandas when approaching such large obstacles. He points out that the iconic bears, which have become a totem for the entire planet’s ecosystem, are powerful and can be fierce when needed, but they prefer peace and solitude. He says you never see them “in a rush or a tizzy.”

“It’s not about saving the pandas themselves. It’s about the metaphor of how you act in the world. How creation and lives and biodiversity … can be positively affected by your personal commitment,” Brody states.

Brody says there are unlikely allies on the side of the planet, but the biggest obstacle might simply be our short attention span.

“There was a staying power in the 1960s. What we have now is a difficulty staying focused on any one issue for any length of time … our train of thought changes too quickly … we are too easily distracted. But there isn’t a bigger issue than [the climate strike],” he says.

“This is a problem with the environmental movement in this country. People come to us and say, ‘We have this idea that we have to stop the bad guys from doing bad things. Give us money.’ But it doesn’t have to be like that,” he explains. “Panda Mountain is designed to help good people do good things.”

Pointing out that he has received support from Phillips Petroleum, Brody says environmental advocates have many unlikely allies, all over the world.

“You can have committed environmental people in an oil company,” he says. “That’s something I’ve learned. It’s not a contradiction.”

What has to end, he believes, is “business as usual.”

“We have never had such broad cultural concerns about the world,” he says. What needs to happen, therefore, is a broad cultural response. If climate changes continue progressing at its current rate, he says that much will become abundantly clear.

“Simple things in life with be disrupted. This is unavoidable.” he says.

But if Panda Mountain and its many allies can achieve their goal to save some, to alleviate suffering for some, they will create a cumulative impact on the world that is undeniable.

“Every religion will say there is beauty and godliness in creation,” Brody says. “This is about something sacred.”

Following the recent climate strike, Brody feels a cautious optimism. He says he’ll keep trying to save small portions of the globe, in his own backyard in Wisconsin - and in the mountains of Sichuan Province.