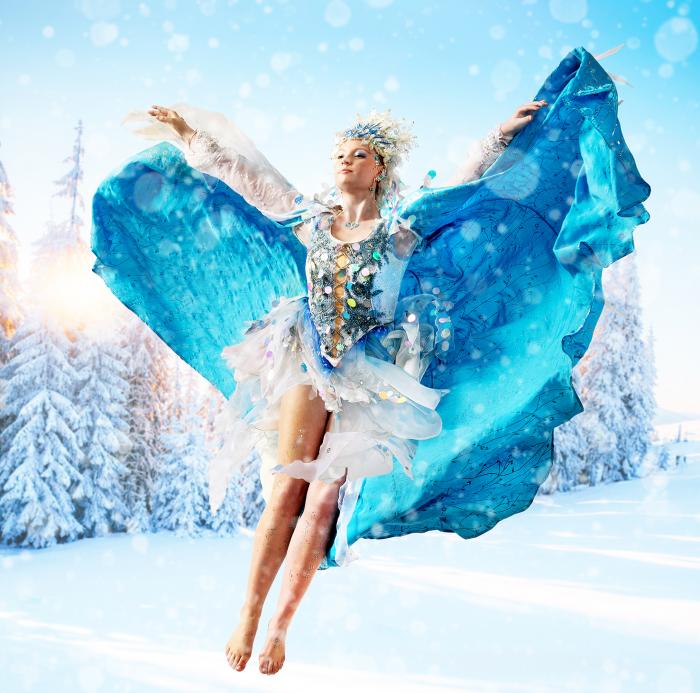 As a little girl who had only recently learned to walk, Lena Komar loved to dance around in her family’s living room in Blue Mounds. Seeing the joy their toddler felt as she leaped and twirled, her parents had a simple idea; they would enroll her in dance classes. They wanted to find out if dance was “her thing.”

Fourteen years, countless hours and more than 100,000 miles later, that little girl is shimmering in icy blue, gliding across the stage at one of Wisconsin’s most prestigious venues as the Snow Fairy Queen in a magical holiday performance.

Now a Mount Horeb High School senior, she will star in Kanopy Dance Company’s “Winter Fantasia” at the Overture Center, December 2-5. “Winter Fantasia” presents two treasured winter stories rooted in Scandinavian folklore and brought to life through dance: “Once Upon a Winter’s Eve” and “The Norse Tree of Life (Yggdrasil).”

Rounding out the program is a premiere, “Winter in the City, danced to Leonard Bernstein’s score for “On the Town.”

In creating Winter Fantasia’s “Once Upon a Winters Eve” and “Norse Tree of Life,” Kanopy’s co-artistic director, Lisa Thurrell, was inspired by her childhood and her imaginary journeys into the lives of the mythological tomte, a mischievous but protective spirit in Scandinavian folklore and by the shimmering fairies who appear during the winter solstice.

“Performing is by far such an amazing experience all around,” she said. “The space, lighting, music, and audience creates an entirely new atmosphere than that of rehearsals; one of thrill, anticipation, and vulnerability. On stage I feel so free to be expressive and tap into the emotional journey of the piece.”

“Lena was always dancing around the living room, so I decided to explore getting her into dance,” explains her mother, Michelle.

Both Michelle and Lena’s father, Jeff, had experience in the arts themselves, but they wanted their daughter to find her own path.

“Once I spoke with Lisa Thurrell and her approach to dance with young children, we decided to enroll Lena at Kanopy,” recalls Michelle. “She was three years old, and we had a 40-minute drive every Saturday to State Street from Blue Mounds.  I figured she would do this for three-to-six months and then we would try something else, until she found her thing. This turned out to be her thing.”

Right around the time Lena was starting high school, her mother tallied up the miles she had driven bringing her daughter to and from dance classes, starting with that first one when she was so small. It came to 90,000.

“Since we lived just far enough out, I could not go home in between classes, so I had a lot of hours sitting in my car working while she was at dance,” Michelle said. “Now she drives herself, but I would drive it all over again for her.”

While getting most kids to stick with their chosen classes can often require effort, Lena was almost always happy to dance.

“Interestingly, getting Lena to stick with dance has never been a problem,” Michelle says. “I can count on two hands the number of times in the past 14 years when she has said ‘I just can’t do it today.’”

Lena says Kanopy’s “fun” approach to dance sparked her interest when she was just a toddler. Later, she stayed committed due to the school’s “inclusive environment” and use of what is known as the “Graham technique.”

“I love how expressive, freeing, and driven the art form is,” she explained. “It has architecture and principles like any other dance technique, but it also places a strong emphasis on the humanity in dance through the breath.”

She went on to say classes left her eager to explore dance and hone her technique. It also helped her grow, both as a performer and a human being.

“I not only gained a large appreciation for the arts, but learned so much that I’m able to apply to my everyday life,” Lena said. “Kanopy taught me about working with others, the importance of expressing ideas, and how much one can achieve with a strong work ethic. Beyond life skills, I formed invaluable friendships with so many of my peers and engaged in unforgettable experiences.”

“There were a couple of ways I knew she was in it for the long haul,” her mother explains. “First, when she was just starting out at four and five years old.  She would make friends with her fellow dancers only to have them leave and go on and do something else. She of course was sad to see them go, and I was worried she would quit because her friends did.  She never did.  In fact, she dove in more. Secondly, there was a time when she was maybe nine or 10 and I was taking her to class after school on a fall afternoon and she just was in a down mood.  Afterwards we went to the Union to get some ice cream and listen to music.  At one point she turned to me and said ‘You know mom, no matter how bad my day is once I get to dance, that all goes away.  Dance always makes me feel better.’ I knew then she had found that thing that made her breathe.”

“No matter what she does going forward – whether it is taking time away from dance to focus on college, teaches dance part-time for a job, joins a Company down the road  – it will be something that is always there for her,” she adds.

The little girl who once danced in her family’s living room is now dancing on one of Wisconsin’s most prestigious stages. For her, it is a natural extension of the thing she loves most. For her parents, it is an affirmation of the love and support they have given their child.

“As a parent, you are always excited to see your children doing something they love,” says Michelle. “ I think for my husband and me having the arts and music being such an integral part of our lives, to see Lena flourish in something that is completely her own is beyond rewarding. And to see her have the opportunity to take on a role like this her senior year, after 14 years of dedication and hard work, is just so wonderful.  We are beyond happy for her.”

Of course, there have been challenges along the way. COVID placed various hurdles in front of Kanopy and its performers. But dancers are fairly good at clearing such obstacles.

After being delayed a year due to COVID, Lena and fellow KC2 dancer Ella Quinn spent three weeks at the Martha Graham School for their Intensive Summer camp in NYC this past July. They spent all day dancing and then the evenings exploring NYC with Ella’s parents.  Lena and Ella were also invited to rehearse with The Sokolow Dance Company at their studio in NYC for a live virtual performance they did later in the summer with Kanopy.

Lena’s mother says that after a year spent “stuck at home” with her parents, she is happy to get out and spend time with friends. She is involved in many school activities and clubs, along with band. She also plays flute in the Mount Horeb Symphonic Band and Marching Band.

“Dance is never far from her though,” observes her mother. “She spends a lot of time outside of dance hanging out with her fellow dancers, who have become great friends as well. They are foodies, so they love going out to eat, as well as going to the movies and shopping.  And laughing. There is always a lot of laughter when they are together.”

Lena said Winter Fantasia is easily one of her favorite shows to perform.

“All of its pieces are so magical and lively,” she said. “In Yggdrasil, I love the music, the style of movement, and the playful quality. It’s such an interactive piece, and it’s all about connecting with the other dancers - and the tree - on stage. In Winter’s Eve, I love the story element to it. There’s a clear journey, and the snow complements the magic the dancers bring to life through movement.”

Lena’s advice for young children, and their parents, was simple: “Pursue the performing arts.”

“There are so many invaluable experiences and lessons to take out of it, even if it’s not something you plan on continuing later in life,” she commented.

And Lena’s parents were right; dance was “her thing.” For a while, at least.

After high school, Lena plans to attend a four-year college, where she hopes to major in neuroscience. While she won’t be majoring in dance, she says she “may take a few classes on the side.”

“Even though I don’t directly plan on pursuing dance, there are so many valuable lessons for me to take away and apply to my future plans, such as communication skills, perseverance through struggles, and knowing investing time in something has its payoff,” she said.

Four Kanopy Dance Academy students will rotate other important roles in “Once Upon Winter’s Eve” and “The Norse Tree of Life.” Amalia Fung-Jenkins (age 13) and Nila Voss (age 11) share the role of the “Little Girl” in “Once Upon a Winter’s Eve”.  Katelynn Schroeder  (age 12) and Hope Cullen (age 14)  will alternate as the “Little Maiden” in “The Norse Tree of Life (Yggdrasil).” As a safety precaution and for added dramatic flair, all unvaccinated dancers under 12 cast in Winter Fantasia will wear artful masks on stage crafted by the award-winning New York City costume designer, Davis Quinn. Kanopy is a resident company of Overture Center for the Arts.

Gleanings
120 Years Ago- Nov. 28, 1901 P.A. Sletto is receiving new stock these days and will open up an up-to-date shoe store, having put in modern arrangements in the interior of his fine store, the old...
Mount Horeb hosts Country Christmas, featuring farm models and rural paintings

The Driftless Historium’s newest art installation, A Country Christmas, features the artwork of Barneveld-based Douglas Eames and scale model tractors and farm implements made by the late Thomas...
Santa to visit library

Join the Mount Horeb Public Library for Santa Day, Saturday December 4, from 10 a.m. to 1 p.m. Enjoy Santa Storytime at 10 a.m. and some festive farm fun with Havens Petting Farm, onsite from 10:30 a...
Tree lighting coming up Saturday
The Mount Horeb Fire Department and EMS’s 32nd Annual Lighting of the Tree will take place Saturday, December 4 at 5 p.m. in Mount Horeb. The festivities will include a silent parade of decorated...
PFLAG to host faith leader Vica Steel on December 6
Please join PFLAG Mt. Horeb on Monday, December 6, 2021  from 6:00-7:00pm (via Zoom) for a discussion with former teacher and trans woman, Vica Steel.  At the age of 56, after many years teaching...