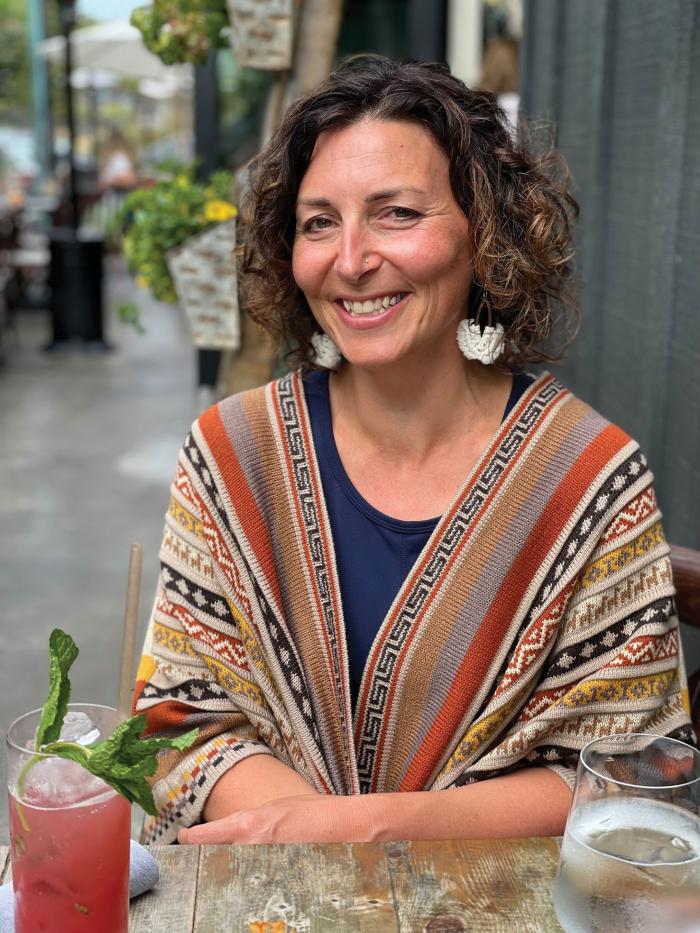 ‘Everybody wants to hear a story’

As she prepares for the release of her debut novel, Ginsberg talks about the power of narrative

Maggie Ginsberg starts most of her conversations the same way: “Tell me your story…”

“I always try to listen,” she explains. After all, she points out, “everybody wants to hear a story.”

Ginsberg is an accomplished and eclectic writer and editor. Her career, which began here at the Mount Horeb Mail, includes bylines in a vast array of publications over the past two decades. She is currently an editor at Madison Magazine. Next year, her debut novel, a small town Wisconsin drama full of big secrets and heady questions, will be published by the University of Wisconsin Press.

For Ginsberg, storytelling, whether in the realm of fiction or nonfiction, “connects the dots” of humanity. As she has jumped fervently from one story to the next, amassing a bulky portfolio and showcasing a knack for ferreting out the most compelling elements of each assignment, she has repeatedly changed course, shifted gears, and plunged headfirst into new ways of finding and telling stories.

“Whatever kind of writer I am, I want to do it this way,” she explains. “It has enriched my life, and, I am told, the lives of a few other people.”

“The ones who aren’t mad at me, anyway,” she adds with a wry chuckle.

Ginsberg’s career path has been unconventional, as was her early life, thanks to her adventurous parents.

“It was 1975 and I was named after the Rod Stewart song,” she says of her birth. “But just the Maggie part, not Maggie May.”

“My middle name is Snow, if that tells you anything,” she adds.

Her parents had moved to Longville, Minnesota, “to live on love.” The family resided in a shack with an outhouse and not a whole lot else. In fact, they were so broke her father had to sell his shotgun to buy enough gas to pick them up at the hospital after Maggie Snow Ginsberg was born.

By the time she was four-years-old, they were living a more middle class life and her father was working as a fur buyer. Then, at the start of her fourth-grade year, they relocated to a small village in Wisconsin. It was, for Maggie, a special place right from the start.

“Mount Horeb is definitely what I think of as my hometown,” she says.

“I was thrilled that it had a mall,” she explains. “I spent all of my time on my bicycle, exploring.”

She has rich memories of the Historical Society museum, which was located above the village hall at the time, and of books at the library, horoscopes at the pharmacy, the sights and sounds of Dick’s butcher shop, Schubert’s diner, the Ben Franklin store and Ryser’s Cheese Factory. She loved her hometown newspaper, the Mail, though she never imagined she would someday write for it.

“I always wrote, but I never considered myself a writer,” she says. “I just never thought about it as a job. I thought of it as something other people knew how to do.”

At first, the family of five rented an 800-square-foot house on Green Street. They eventually built and moved into a rural home outside of town, where her parents still reside today.

Her early years made a lasting impression on Ginsberg, as did her stint working four-hours per week at the Prairie Bookshop.

“I cried when John [Stowe] closed [the store many years later],” she says. “I also bought four of his bookcases. They’re in my living room now.”

Ginsberg graduated as part of Mount Horeb High School’s Class of 1994, having “fallen further in love” with literature because of a teacher, the late David Van Natta. She attended the University of Wisconsin-Madison, graduating in 1997. She never took an English or Creative Writing course while she was there, but she learned much about the power and nature of narratives.

“My degree is in history, and history is really just storytelling,” she explains.

Still, Ginsberg continued to see herself as a reader, not a legitimate writer. She went to work for her father at Valpak and Dollars & Sense Magazine. She sold advertising, got married, had a baby, moved back to the Mount Horeb area from Edgerton, and had another baby. Then, in 2006 she took a two-night Intro to Freelance Writing UW Minicourse after seeing the catalog in a doctor’s office waiting room. The ultimate goal of the class was to get published, and while many thought of it as a long-term objective, she jumped swiftly to action.

“I stayed up all night, created a website for myself as a freelance writer, and ordered business cards,” she says. “In the morning I called the Mount Horeb Mail.” A fire was ignited in her, and it has blazed, brighter and brighter, ever since.

The editor at the time, Gary Schuetz, assigned her first lead, covering a holistic health fair.

Ginsberg Googled “How to write a newspaper article” and got to work. When she arrived at the second UW class, she already had a clipping with her, cut out from the same newspaper she had read as a child.

She then pitched a story to Madison Magazine, a publication where she would eventually become an editor. The only problem was that they required “clips,” with an “s,” from their potential writers.

So she returned to Schuetz and asked for another lead. Once that story was published, she grabbed a newspaper, added the second story to her growing portfolio, and submitted it.

“I just started learning,” she says. She spent all of 2006 and part of 2007 as a staff writer at the Mail, developing her own style and discipline.

“I am so grateful for that,” she says. “I learned so much. To have that on-the-job experience and work so closely with people was just invaluable.”

“I had to just figure it all out,” she adds.

One thing she understood from the very start was the value of stories, and the responsibility that comes with telling them.

“What if this is the one time this story gets told?” she asked herself. “How can I do it justice?”

Ginsberg began writing for magazines regularly in 2007. Her stories appeared in Madison Magazine, Isthmus, Wisconsin Trails and a litany of university publications, covering everything from dairy science to law.

Through the years, she continued taking local classes. Most were on non-fiction writing, but in 2016 she took Kathy Steffen’s fiction track at Write by the Lake. She subsequently signed up for another class, The 5th Semester. With her trademark gusto, Ginsberg hammered out her novel’s first draft in just four months. She got an agent, but the book didn’t sell until 2021, when it was accepted by the highly-selective University of Wisconsin Press. Now, Ginsberg is preparing for the book, tentatively titled “Still True,” to be released in the fall of 2022. While it is a different type of storytelling, she approached it with the same ever-growing writing toolkit she used for her nonfiction career. “It was the same muscle, for me,” she says.

As had been the case with non-fiction nearly 20 years earlier, she was inspired to learn that fiction was something you could learn to do.

“I always loved novels,” she explains. “But I always thought writing them was something people just knew how to do. Then I learned there’s a structure and a scaffolding. You don’t just have to be an imagination savant.”

Her upcoming novel is about a woman who has been married for 37 years and has been “keeping some big secrets, as people do.” When one of those secrets - an adult son - shows up on her doorstep, she is forced to decide if and how he fits into her life, and the lives of those around her.

“It’s a small town Wisconsin family drama about what we owe each other, and what we don’t, and about whether we can have intimacy and independence at the same time,” Ginsberg explains.

The story is fiction that draws much from the realities of life in Wisconsin. And while it might be “Still True,” it really is fiction, the author points out with a laugh.

“She’s not me!” Ginsberg says of the protagonist. “My ex-husband is not in the book, that’s for sure.”

But there are similarities elsewhere in the text. For instance, Ginsberg and her current husband live in separate households, which is primarily the product of the fact that they both have children from prior relationships who they did not want to uproot when they married. She lives in Blue Mounds, just outside the town she fell in love with when her family moved here from Minnesota.

Just before “Still True” was accepted for publication, Ginsberg took the associate editor position at Madison Magazine and stopped most – but not all - of her freelance work. She is, as always, busy listening to stories, and telling them, knowing each time what a weighty responsibility that is. Working to get each story right, and do each one justice.

In addition to her writing, she has her husband, four kids, two dogs, two cats and a penchant for trying new things. When she has free time, she likes to spend it at Blue Mound State Park, where she runs the trails and wanders the landscape. She never knows where she will end up next, but she is always up for an adventure, and always ready for something new.