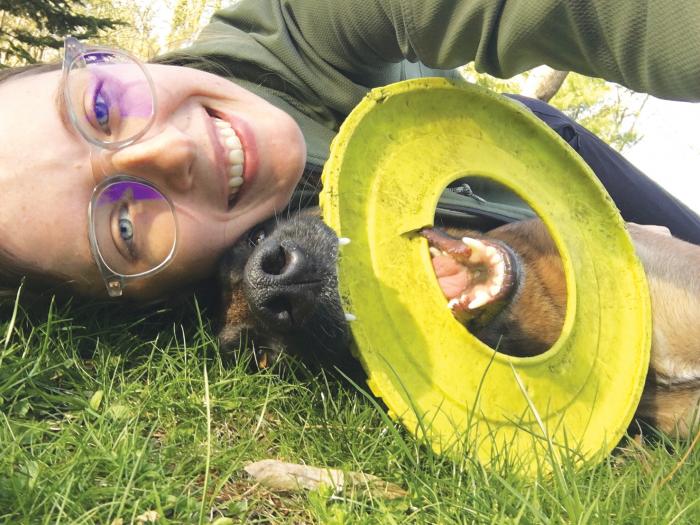 Erin Wilson and Eva forged their bond while exploring wild places together. This May, they fought side-by-side against a mountain lion that attacked on a California trail. Photo contributed.

Erin Wilson was attacked while hiking

Erin Wilson was heading down the trail when the mountain lion attacked her. An experienced outdoorswoman, she was daydreaming as she walked toward a stream to join her dog, Eva, a two-year-old Belgian Malinois, who had gone ahead to play in the water.

Wilson had been wearing only a tank top and yoga shorts, and had gone back to her truck to grab a coat. She and her dog were always looking for new horizons to explore, so they were venturing into the Whites Bar Picnic Area of the Shasta-Trinity National Forest for the first time.

The lion struck from behind, and to her side, emerging from a cluster of bushes and trees, ripping the shoulder of the coat she had just donned. Wilson had come face-to-face with predators before, including black and brown bears, but it was too late to scare this lion away or make it to safety. It had already decided to attack.

“I froze,” she recalls. “I know I froze. I think I screamed, which you are not supposed to do.”

Then she uttered a single name that almost certainly saved her life.

By the time she finished calling her dog, Eva was surging up the trail, dirt and rocks skittering behind as her paws traversed the earth. She leaped onto the lion without hesitating.

“I just remember the impact,” Wilson says. “I remember her hitting the lion, then growling.”

The two animals, one a deadly wild predator, the other, a dog that had been rehomed because it was too rambunctious for small children, fought.

“After a few moments, I heard her start to whimper,” says Wilson.

The lion, which was likely three or four times the dog’s size, got her skull in its jaws, biting down. Now, it was Wilson’s turn to be a hero. Rather than running to safety, she grabbed the largest rock she could find and smashed it over the lion’s head. She brought it down with such force that the rock shattered into several pieces. She grabbed another and tried again.

When the predator wouldn’t let go, Wilson tried to suffocate it.

“I actually stuck my hands in its mouth, trying to choke it,” she said. “That’s when I scraped my hand on its teeth.”

Still, the lion would not relent. Wilson remembered something her fiancé had once told her.

“I stuck my fingers in its eyes and just tried to pull them out,” she continued. “No matter how hard I tried, they wouldn’t come out of its head. It was like they were so much bigger than the sockets.”

As she tried to save Eva, the cougar kicked at her with its hind legs.

‘SHE WAS A CONSTANT IN OUR LIVES’

The story starts along a different river, 2,000 miles away; the Sugar River, in rural Mount Horeb. Wilson, who graduated from Mount Horeb High School in 2016, remembers being shy during her childhood.

“I think in school I was probably pretty quiet. I mostly kept to myself,” she remembered. “Maybe it was a confidence issue. I’ve grown into myself since then.”

“When I was a kid, I would just go down to the river and play,” she said. “That was my happy place.”

After graduation, Wilson went to college in Minnesota, but came home a year and a half later. In January of 2020, she decided to strike out and live the kind of lifestyle that made her happy. She wanted to spend as much time as possible in wild places, where she felt free and content.

She headed to Florida, then Alaska, then Montana, and finally California, always seeking nature.

“I decided I was going to go and just do what makes me happy,” she said. “My experiences, not just this one, have been life-changing for me.”

A self-described “trout bum,” Wilson knows her path winds through rivers, down trails and up mountains. She and her fiancée currently live on the edge of a vast swath of Bureau of Land Management property, where they raise ducks, turkeys, geese, chickens and bees. She learned a new mantra: “No one can make you totally happy, except for you.”

Her dog never left her side as they traveled the country. Eva’s first home was in a family where her owners feared their new puppy, just four months old, was too rambunctious around their two small children. Belgian Malinois are the breed favored in police, protection and military work, able to leap eight feet into the air and even scale walls and buildings.

“They are nuts,” laughs Wilson. “They are insane.”

Wilson, her fiancée, Connor, and Eva were a family during pandemic that meant family was all many people had.

“We were quarantined with her,” she said. “She was a constant in our lives. She was like our kid. Our daughter. Our world.”

“When we got up to Alaska, that changed her life,” she continued. It was there, in the vast wilderness, that Eva got to experience true freedom, exploring and playing with other rugged canines.

Like her owner. Eva loved the water. She loved anything Erin touched.

“Her canines were flat, because when she was a puppy I would throw pebbles on a beach full of rocks, and she would go find the exact one, because she knew I touched it,” Wilson said. “She would also stick her head in the water and pull out rocks, and she’d carry them like she was working out.”

‘YOU ARE NOT GOING TO TAKE MY DOG’

The evening before the mountain lion attacked her, Wilson worked a long shift at a restaurant. Eva and the wilderness would help her decompress the following day, she figured. She almost stopped at the Whites Bar area on her way out that morning, but instead carried on, only stopping there to explore on her way home. Eva was playing when she heard Wilson cry out.

With the lion’s jaws clamped on her skull, the dog was immobilized. The teeth pierced her skull in multiple places.

Wilson never considered fleeing to safety. People who venture into wild places often carry a sidearm to protect themselves from predators, and Wilson sometimes carried a gun, but she did not have it that day. After fighting with her bare hands for what seemed like ages, she remembered that she did have a police baton in her truck. She ran back, grabbed it, and flagged down a woman who was driving by.

Wilson knew lions carry away their kills, so she didn’t wait long for a response. She could feel the initial rush of adrenaline ebbing, so the rest she would do through courage and force of will alone. She said it felt like she was running “through water” as she sprinted. She weighs approximately 110 pounds, but says she is surprisingly strong when she needs to be.

She ran back and found the cougar dragging Eva away, its jaws still clamped around her head. Wilson took the baton in both hands and brought it down, again and again, on the animal. She says it never occurred to her to leave.

Each time she raised the baton over her head, she yelled, “Get the ____ off my dog!”

Mountain lions usually kill deer, and are fully capable of bringing down elk, which can weigh up to 700 pounds. A recent study in Idaho actually showed that lions there kill more elk there than wolves do. They usually crush the skull or neck, or the windpipe.

This particular cougar left empty-handed, however. Eventually, when it became clear Wilson would not give up, and as the stranger joined her with a can of pepper spray, it released its grip on Eva, took one last swipe at them, and disappeared. Wildlife officials who collected DNA evidence confirmed Wilson and Eva were attacked by a cougar, but their attempts to track and trap the animal were unsuccessful. Those attempts have since been suspended.

When the lion let go, Eva used the last of her strength to dash to the truck, where she jumped into the cab. Wilson drove as fast as she could, crossing double lines much of the way, to the nearest vet, which was well over an hour away. As she drove. Eva began convulsing and fell to the floor.

“I just kept pleading with her, ‘Please, stay with me. We don’t want you to go,’” she said.

It was only after arriving at the animal hospital that Wilson learned, from wildlife officials, that she also needed medical treatment, in the form of rabies prevention. When she was done, she returned to the vet, where she held Eva for an hour before going home to sleep.

The attack happened on a Monday. Eva was discharged on a Thursday. Veterinarians said only time would tell if she would survive. Her sight had been damaged, she had suffered a traumatic brain injury, and there were holes in her skull and nose. But she was awake and with her family.

“We got her a milkshake the day we brought her home from the vet,” she said. “She drank the whole thing in little bits. Then we just loved and pampered her for the last two weeks.”

Eva’s brain continued swelling. Eventually, her convulsions returned. Wilson brought her to the UC-Davis Veterinary Hospital, where she eventually fell into a coma and stopped breathing. A brain scan showed she was still trying to wake up, even under heavy sedation, just before she died.

“They are so loyal and driven to please,” said Wilson. “Perhaps she was just trying to power through it all for us.”

“She was my everything,” she continued. “She was such a cuddle bug.”

Before the attack, Wilson had planned to get special buttons that particularly intelligent dogs can use to “talk” to their owners. In the end, words were hardly necessary. Eva didn’t care what Wilson was wearing, how much money she had, or who she voted for in the last election. She was, in other words, her friend.

“This has definitely made me realize that a lot of the things people get upset about in life are really small,” she mused.

At home, Wilson is still recovering. She cries when she recounts what happened that day, but she laughs, too.

“I don’t mind telling the story,” she said.

She is not alone. She has Connor, and she still has the wilderness, which brims with lions and bears, both of which live near her home,  but is still her happy place.

She also has two puppies, Caucasian Shepherds, one of whom is eight months old and was “basically raised by” Eva. She plans to bring home another puppy soon, too. It will be Eva’s half-sister.

“We always thought Eva was special,” Wilson said. “I’m sad this is what it took, but I’m glad everyone gets to see what a good dog she was.”

Happy Solstice time, everybody! This is Rose Brookins, writing in with greetings from the Mount Horeb Farmers Market board and all of our vendors, sending our best wishes that you are all enjoying...
Obituary